Chapel of the Holy Cross

The Chapel of the Holy Cross is the artistic vision of a determined lady in Hungary, Marquerite Brunswig Staude.  The first conception came to her while in New York, watching the Empire state Building being built.  When she viewed a from a certain angle, she could see a a cross at the center.  Voila she thought what a great idea for a church!  For days she was haunted and obsessed in getting the church to take form.  Being a sculptor she visualized the church in a sculptured form.  Using simple bold strokes a sketch was made, being a cruciform church in plan and elevation.  This was not a natural or logical upon which every catholic church is built.

who was struck by the idea and together they interpreted a modern skyscraper cathedral to a 500 ft scale.  Lloyd built the first architectural model with the articulated cross.  The whole structure lined in glass and perforated stone screen.  In 1937 this plan was accepted and to be built on a hill in Budapest overlooking the Danube.  World war 2 put a stop to this dream.  The plans for the church remained dormant for years.  Finally in 1953, having a ranch in Sedona Arizona Marquerite found the ideal land for her beloved chapel.  While with a guide on horseback she was looking for a sign on the right location for the chapel.  She found it while going for stroll thru the canyon.

Etched right on the Red Rock was the RX symbol

Exactly the same way found on a prescription pad for big pharma.  Her parents Lucien and Marguerite Brunswig made the family millions of dollars producing pharmaceutical drugs.  This was just the right sign she was looking for from GOD.   Once Marguerite discovered the exact right location to plant her cross.  The land was government owned and took an act of congress to obtain a deed and building permit.  It was on the the recommendation of Senator Goldwater her beloved Chapel could proceed.  The William Simpson construction company broke ground April 1955 and was completed April 1956.

The Chapel is a memorial to Lucien and Marguerite Brunswig

Once the Chapel of the Holy Cross was completed.  When we consider that just as the should inhabits the human frame.  Then a house is built to shelter the frame.  It is the mission of the church to shelter and inspire both the soul and the body.  It therefore should not just be a monument to faith but a spiritual fortress so charged with God, that it spur’s man’s spirit Godward.  Having prepared the ground Marguerite vision has taken root, grown and invaded the world.  Marguerite prayer “May this Chapel spread these truths a thousandfold…Finding Christ thru art.

As an artist this is my offering…Ad Magorem Dei Gloria…in answer to the one who in order to save us stretches his arms onto the cross.  Marguerite statement “That this Chapel may come to life in the souls of men and be a living reality…Herein lies the whole message of this church…Marquerite Brunswig Staude. 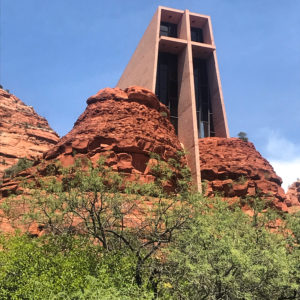 The Chapel of the Holy Cross

The Chapel of the Holy Cross

The Chapel of the Holy Cross receives 3.5 million visitors a year.  It was Marguerite desire that no services be held at the Chapel.  She wanted for all who visit to pray, meditate and reflect and find God thru the beauty of art. Marguerite donated the Chapel to the Roman Catholic Church upon its completion.